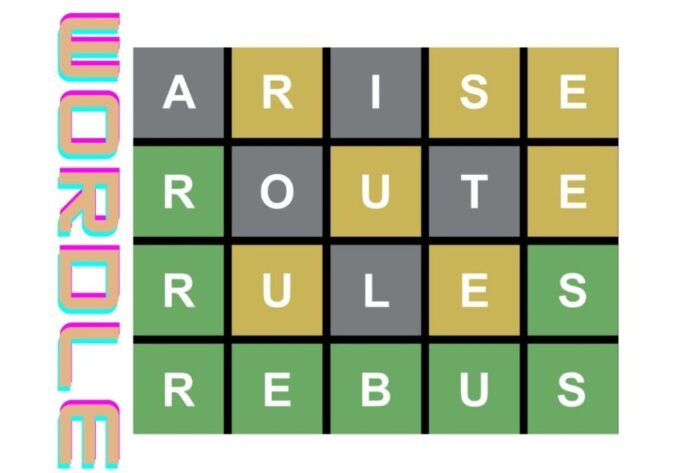 On my Twitter feed, between those sarcastic one-liners and intense arguments, I found people sharing their results of a puzzle. But there were no words, just five boxes in six rows filled with the colors yellow and green. Beneath it the user wrote what he called his Wordle Score. I was intrigued and typed the word Wordle on my search engine and a few seconds later found myself on the New York Times website staring at the five empty boxes and six rows. The website gave an easy-to-understand brief before I commenced.

No matter how simple the rules. The best way to understand a game is to play it!

Found the first letter but not its position

The same thing happened with the second letter Found another two letters but this time with their positioning The premise of the game made it huge. Josh Wardle, the creator of the Puzzle, sold the game to The New York Times to include it in their subscription puzzle service. The game is being translated to different languages around the globe to expand its already ever-increasing user base. The creator does not want to monetize and also does not compromise on the fundamentals. The New York times have not made any changes till now, and have held its end of the bargain.

Reasons Behind the Wordle’s game popularity?

One Wordle per Day:
At a time when the world indulges in binge-watching and abundant content creation and distribution, the puzzle game sets itself apart with a policy of less is more. It works perfectly for Wordle as the scarcity increases the curiosity and yearning for the game. The user only gets six chances a day to guess the right word. It raises the stakes and intensity of the game.

The Word:
The wordle of the day is not a lengthy, unusual word with complicated spellings, it is a five-letter word with simple spelling so that the users can identify the word without wasting a lot of time. The soul of the game lies in how many chances the user is able to guess the word with few hints, it has no intention of assessing the vocabulary of the user.

Social Media:
The user of the game can share their Wordle score on their social media accounts without giving out the wordle of the day. This feature has contributed to the popularity of the puzzle game. Millions of wordle scores are shared online every day, stimulating the conversation with the existing users and generating curiosity among people on social media who are still unaware of the game.

Hope you have Checked Everything About the Word Game “Wordle” Gone Viral on the internet. How to Play Wordle? Tips and Tricks, which will make you a “Wordle” Master. We wish you all the best.

Q1. Who has developed Wordle?

Q3. Is there any time limit on Wordle?

Ans. No, you can take as much time as you want to solve the puzzle

Q4. How many tries are given to solve the puzzle?

Ans. You will only get 6 tries to solve the puzzle

Q5. Do I need to make an account or register somewhere to play Wordle?

Ans. No, it is free of cost and no data of yours is required to play

Q6. Where to play Wordle?

Ans. Ans. It’s available on the website of the New York Times. You can visit their website – nytimes.com/games/wordle/index.html

Q7. How many puzzles can I solve in a day?

Ans. The game only provides one puzzle a day, so if you’ve solved today’s puzzle then come back again after midnight.

Q8. Is it available in Spanish?

Ans. Yes, it is available in Spanish as well as 90 other languages

Q9. Is Wordle available on android or iOS?

Ans. There are many games similar to Wordle but the original one is only available on New York Times website

Q10. How can I compete with my friends?

Ans. Wordle maintains the streak of your correct answers and many users compete in this manner

The best escape from Tarkov hacks don't use cheat codes. The developers of the...
Gadget

Do you ever find yourself in a dark room, fumbling for your keys or...

The best escape from Tarkov hacks don't use cheat codes. The developers of the...
The News Mention